It’s an age-old question—or at least, a 50-year-old debate. What’s better for the planet—real or faux fur? The answer you’ll get may vary greatly depending on who you’re asking and what part of Canada they’re from. For example, many southerners are rejoicing over Canada Goose’s decision to eradicate the use of all real fur from its coats, while northerners are upset with the company’s hypocrisy (after the Project Atigi line, which worked with Inuit women who designed parkas for the company). It’s not likely these two groups of people will see eye to eye anytime soon, but the debate still persists. So let’s break it down—faux fur or real fur: which one is better?

What is faux fur made from?

Since its first introduction into mainstream fashion in 1929, faux fur has been the answer for many people who want a similar look and feel to the real thing, but without the higher price tag. It gained popularity in the 1990s—especially after the PETA campaign in 1994, where Cindy Crawford posed nude with a sign that said, “I’d rather be naked than wear fur.”

But like many things these days, the faux fur market relies on plastic. It is a knitted synthetic fabric made from a blend of acrylic and polyester, which is essentially various forms of plastic. Those fibres are derived from coal, petroleum and limestone. And while it sheds like real fur, it is not biodegradable. The materials from faux fur end up in the earth and in waterways as micro plastics.

So what’s the harm?

It’s likely no surprise to hear that plastic is an unsustainable resource that sticks around for hundreds of years. Plastic can be found in more than 60 per cent of seabirds and 100 per cent of sea turtles. It ends up in human’s food too, as one study says human swallow about a credit card worth of micro plastics in a year. And according to a 2016 study, one synthetic jacket releases about 1,174 milligrams of microfibres—thinner than a human hair—every time it’s washed. 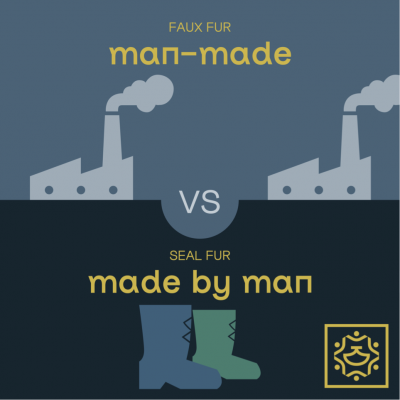 Well then what about real fur?

Real fur is biodegradable and the quality is more durable than faux fur, meaning it lasts a lot longer. The biggest rule when it comes to sustainable fashion is instead of buying many cheaper clothing options, one should buy fewer more durable items that you can wear time and time again. And so with that in mind, real faux certainly wins over the fake fur coats that will be pushed out of stores every few months for new inventory.

This is a common argument for real fur and there’s a good reason behind it. While yes, faux fur coats may be warm, it doesn’t have that thick undercoat that real fur does. Real fur also has water shedding properties, which helps repel the snow and keeps moisture near the surface of the coat, so it won’t melt or freeze between the layers. While of course, you should avoid heavy rain while wearing fur, the moisture from snow or light rain won’t seep into the coat. While faux fur can also get damp, a down pour is likely to cause more damage because it does not have that protective layer. If you get the lining of faux fur wet, it can loosen the fibres and ultimately ruin the coat.

So, when it comes to quality and sustainability, real fur is the better choice. But with that said, being aware of where you buy your items is crucial.

Indigenous use of fur

When Victoria Kakuktinniq was chosen to highlight her seal skin and fox fur designs at Paris Fashion Week, the Nunavut designer was over the moon.

“I feel very honoured to have an opportunity to represent and revitalize Inuit art and fashion on a world stage,” Kakuktinniq told NNSL in 2019. “I hope this opportunity opens up greater avenues for fashion in the North and we see an influx in demand for Inuit fashion which will translate into more desire for education in traditional sewing and more jobs for tailors and seamstresses across the North.”

While her work has been seen in Paris, New York and in Flare fashion magazine, it’s important that Kakuktinniq keeps with tradition. Under her label Victoria’s Arctic Fashion, her collection includes more than 1,000 parkas made with seal skin embellishments and fox fur lined hoods.

Born in Rankin Inlet, Kakuktinniq is one of many young designers who are using fur to combine modern style with Indigenous traditions. It acts as a form of self-expression and helps the rest of Canada learn about and appreciate Indigenous cultures.

Traditional harvesting plays a huge role in Nunavut’s economy, too. A 2015 study found that the current harvesting economy is worth about $40 million annually. Seal skin products are worth an extra $1 million to the arts and craft sector. And given the arts and craft sector was responsible for 2,700 full-time jobs that year in northern Canada, it’s clearly a valuable commodity.

But what about the animals?

That’s a question a lot of people may ask. When buying local northern products, the artist can often tell you exactly where the fur comes from. Animals like seals and foxes have a huge population—there are literally millions of seals within Canada. Plus, for most hunters, it’s important to use every aspect of the animal to ensure nothing goes to waste. In places like Nunavut, where a bag of groceries can cost $200 and most residents face food insecurity, it’s important to be able to go on the land and provide for themselves. The point is, hunting animals is both an economic and sustenance need for northerners.

So, while yes, faux fur is cheaper and doesn’t use animals, real fur products are more beneficial. It doesn’t harm the planet the way microfibres in faux fur does, it’s better quality and it lasts longer. It’s ensured the animals don’t suffer and nothing gets wasted, providing stability for many northerners. Plus, buying real fur products from Indigenous peoples helps keep culture and tradition alive.