Throughout history, the seal has been vital to the Inuit way of life providing food, shelter and clothing.  Men, women and children all have a role in preparing the seal after the hunt for its many uses.

After The Seal is Harvested…

After seals are harvested and are skinned by the hunter, Inuit women move in quickly to prepare the seal skins for garment making. The skins immediately need to be cleaned and rinsed in fresh water to rid the skin of salt, fat and blood.  The next step is to remove the fat and blubber, this is done by laying the skin out flat on a board and scraping it clean with their ulu.  The seal skin is then stretched over a frame and is left to dry.  When placed on the rack, the skin has tied up points that ensure the skin is being stretched at the same tension and is able to dry evenly. 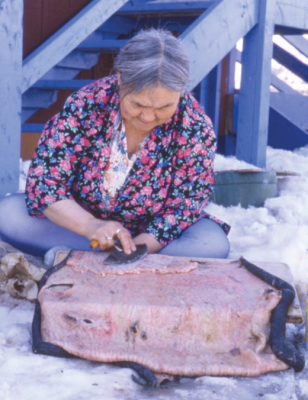 Next step is the Chewing and Stomping of the Seal Skin

After the seal skin is thoroughly dry, it is extremely stiff, and this is the time when Inuit women would use the method of chewing, crumpling, folding and stomping on the seal skin to make it soft enough to work with. Sometimes children would assist the women in the chewing process.

Interestingly, human saliva has emulsifiers that break down fat and connective tissue thus the reason why the chewing of the seal skin is so effective in the softening process.

It is interesting to note that anthropologists have studied the teeth of Inuit women, and they have noted the highly developed jaws and jaw muscles that came from the chewing of skins.  Some Elders would have their teeth worn down from years of this chewing process. 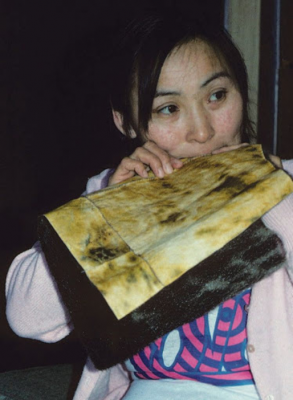 Seal skins processed by this traditional method are found to remain soft and flexible at extremely low temperatures. However, after a day out in the elements, snow, ice and cold temperatures, the skins may be at risk of stiffening if not dried properly. Women would make sure they beat off all the snow and ice from the clothing before they came inside and they would be left to dry naturally, away from direct heat. If some parts of the clothing did stiffen, the women would once again chew the garment to soften it.

Boots or kamiiks needed good care. It was important that they keep their shape and flexibility so the women would clean, stretch and chew them after they came in from the outside. Again, it was also important to dry them slowly. 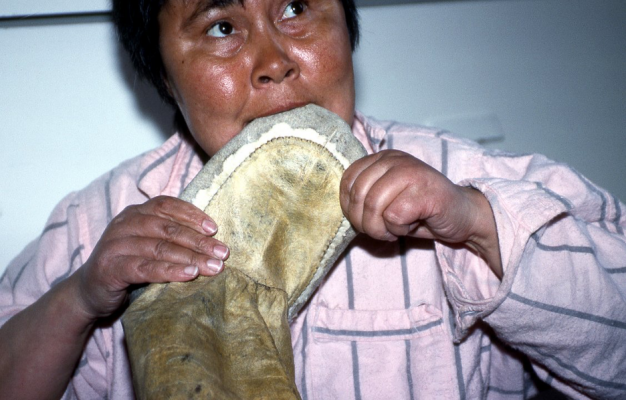 To this day, Inuit women still take the time to soften seal skin in the traditional way as it is the cultural way of their ancestors.  It is a means to pass culture and tradition along to the next generation while also being integral to the making and maintenance of the clothing.