Men can also accessorize with seal skin, there are a variety of options including seal skin bracelets, bowties, neckties, wallets, belts, mitts and hats!

For the next formal outing, why not wear this stylish bowtie, created by Taalrumiq. It is made with black seal and black leather with a silk band, edged in matte black and antique metallic silver beads.

Upinngaaq Designs by April Pigalak offers a variety of bowties for men!

This travel bag for men is a must-have, again a beautiful design by April Pigalak. 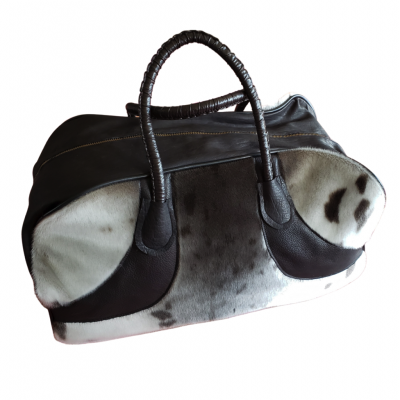 Indigenous celebrities are bringing attention to sealskin fashion by showcasing Inuit designers to the world. Here, Inuit actor, Paul Nutarariaq best known for his role in the feature film, The Grizzlies, proudly wears a seal skin vest at the Taste of the Arctic event at the National Arts Centre in Ottawa. The vest is the work of well known Inuit designer, Victoria Kakuktinniq of Victoria’s Arctic Fashion.

Here is another selection worn by Jaaji, a contemporary, fashion forward parka from Victoria’s Arctic Fashion.

Even in early times, men’s clothing was made to keep men warm and dry but the garments also featured decorative elements including unique patterns, colours and accessories offering a variety of meaning. Today’s designers work to keep their culture alive, incorporating many traditional elements while at the same time, bringing their own vision and contemporary style to their creations.

Visit https://proudlyindigenouscrafts.com/ to shop for some of these men’s fashion items.