The first time I saw an Inuit tattoo was when I travelled to Europe on a mission with Inuit crafters to promote seal skin products.   The women proudly wear these traditional tattoos and I was intrigued to learn more about their significance and history.

I was told it was part of tradition and Inuit culture for young women to commence getting tattoos  as children and then as life experiences happened they would get more tattoos to mark these significant events in their lives.

Because of colonization and teachings imposed by Christian missionaries, this tradition was almost lost until recently when Inuit women proudly revitalized the wearing of these traditional markings.

As was mentioned, for thousands of years Inuit women proudly wore these traditional tattoos. The tattoos were symbols sewn into the skin with bone needle and caribou sinew soaked in seal oil or soot. The tattoo was sterilized with a urine soot mixture and after weeks, the stitches would become black dots and eventually dark lines that would fade but not disappear.  Girls would get tattoos to signify that they had accomplished tasks that women were responsible for such as sewing, breaking ice and preparing it into water, and the lighting of the qulliq (a traditional Inuit lamp made with seal blubber) Interestingly, a woman wasn’t deemed ready for marriage unless she had tattoos. 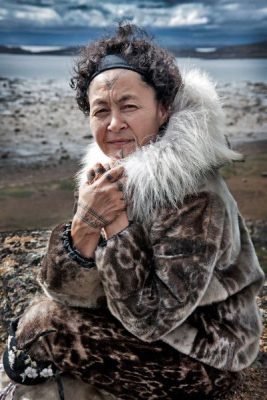 Uncovering the Meanings behind the Inuit Tattoos

Some tattoos represent stories and legends such as the story of Sedna the seal goddess. The story goes that Sedna needed help from her father after she married a raven. The raven had hidden his true identity and promised to provide for Sedna.  However, after they married, he revealed himself as an evil raven with nothing to offer.  Sedna’s father came to her rescue but when they tried to escape by boat, the raven grew angry and with his powerful wings made the sea rough.  The father became fearful he would drown and became angry with Sedna for getting them in this predicament.  In his anger, the father threw Sedna off the boat.  She tried to hang on but to save himself, the father cut her fingers and hands off and as they fell into the sea, they became seals, whales and other mammals.  The tattoo seen on an Inuit women’s hands or arms may pay tribute to Sedna and signify where her arms were severed.

Tattoo placements represent different things.  If you see a V on a women’s forehead this signifies a girl is entering womanhood while lines on a woman’s chin signifies she has had her first period.  Some tattoos would celebrate and signify marriage and children.  Women would also tattoo their thighs in beautiful patterns so as to welcome a new baby and make childbirth more bearable.  It was felt that the new baby would enjoy the beauty of the tattoos as they passed from their mother’s womb into the new world.

When missionaries came to the North over a hundred years ago, they banned Inuit women from getting tattoos calling the practice evil. Sadly, this art form, this beautiful part of the Inuit culture, was almost lost like many other Indigenous practices, because of colonization.  During this time, women would create jewelry that had the same patterns as the tattoos so that they could still express their culture or use it as a way to cover up the tattoos.  Thankfully today’s proud, young Inuit women are reclaiming their culture and are revitalizing the tattoo tradition.

Many Inuit women today feel that getting traditional tattooing has made them feel complete as it is a such a strong tie to their female ancestors.  Many have the traditional symbols and others are adding to these traditional symbols by creating markings to symbolize new milestones in a woman’s life or celebrating family members or marking the community they are from.

Some PIC&D artists and designers are even using Inuit tattoos to create unique clothing and accessories seal designs. For example, one of the talented Inuk designer on PIC&D Online Store, May Ningeongan, the owner of Ujaraatsiaq’s Garments finds inspiration through Inuit Women tattoo designs.  She specializes in the creation of parkas, dresses and kamiks.