Their history, but also their families and communities’ history, permeate their artistic process and pave the way for their art. A creative, singular and often committed art, in which tradition and modernity join hands to combine the past, the present and the future. Portraits of 10 local native creators, whose art deserves to be in the spotlight and applauded.

Elisapie is a singer-songwriter and director. She was born in Salluit, Nunavik, to an Inuk mother and a Newfoundland father. She dreamed of a career in journalism, then moved to Montreal to study Communications. But she mainly made her voice heard through music. In collaboration with Alain Auger, she founded Taima in 2004 and won the Indigenous Album of the Year at the Juno Award for best Indigenous album the following year. Her solo career took off in 2009. Singing in Inuktitut, English and French, her lyrics resonate at the same level of the greatest Quebec authors (from Richard Desjardins to Pierre Lapointe, and Jim Corcoran). Her folk-tinged successes appeal to a wide audience both here and abroad. The quest for Canadian Indigenous peoples’ identity is of great concern to her, knowing that she herself was adopted. So much so that she shot the documentary If Time Permits in Kangiqsujuaq, which was released in 2003 and won her a trophy at the First Peoples Festival. Semi-nomadic as a child, she is in communion with nature. She dreams of a pied-à-terre in the Great North, to pass on this heritage to her children.

Full name Shina Novalinga, this Inuit-born throat singer has 375K followers on Instagram and nearly 2M on TikTok. Proud of her Inuk culture and heritage, she sees throat singing as an art form that is directly connected to the heart, with both authenticity and spirituality. Listening to Shina (who often sings duets with her mother), one is literally transported by the sounds she makes, so reminiscent of nature and wildlife. With millions of views on social media, Shina Nova’s videos are flowing by harmonious rhythms, a raw talent passed on by her mother and which she has been maturing since her childhood. Her platforms also allow her to share parts of her Indigenous culture (hair braiding, wearing a parka, etc.). Her digital presence has also led her to connect with all sorts of Canadian and American Indigenous designers, resulting in new and absolutely compelling collaborations. Shina Nova – who dreams of recording an album with her mother – is also a humanist: she donates a portion of the money she earns to a shelter for native women in the province of Quebec.

Born in Pessamit, on Quebec’s Côte-Nord, Natasha Kanapé Fontaine is a writer, poet, slammer, translator, lecturer and actress. She appeared in the famous TV series Unité 9, presented on ICI Radio-Canada Télé, playing the moving character of Eyota Standing Bear.  As a member of the Innu community, she campaigns for the respect of Indigenous rights, protesting loud and clear – in every forum available to her – the racism and discrimination that are too often the burden put on her people. Through exchanges and dialogue, Natasha pleads for natives and non-natives to come together and share their cultures with respect, humanity and dignity. She expresses her pain and anger related to her identity through art. And her words are echoing far and wide as her powerful collection of poetry N’entre pas dans mon âme avec tes chaussures won her the prestigious Prix des écrivains francophones d’Amérique in 2013.

Based in Salliq (Coral Harbor), Nunavut, May is an Inuit-born fashion designer. As ancestral sewing techniques have been passed down from mother to daughter for generations among the Inuit, May Ningeongan honors them in her creations. She teams up with her mom on a daily basis. Everything that bears the signature of the duo – Ujaraatsiaq’s Garments (May’s first name, in the Inuktitut language) – combines tradition and modernity. There are many details there: from embroidery to appliques, through various geometric shapes. The parkas, dresses, jackets and boots that are created by May and her mother are made from seal fur and leather, a warm, noble and durable material that the Indigenous peoples of Canada’s Far North cherish above all else. You can discover the full spectrum of May Ningeongan’s talent and purchase the awe-inspiring creations of Ujaraatsiaq’s Garments right here on the Proudly Indigenous Crafts and Designs website. 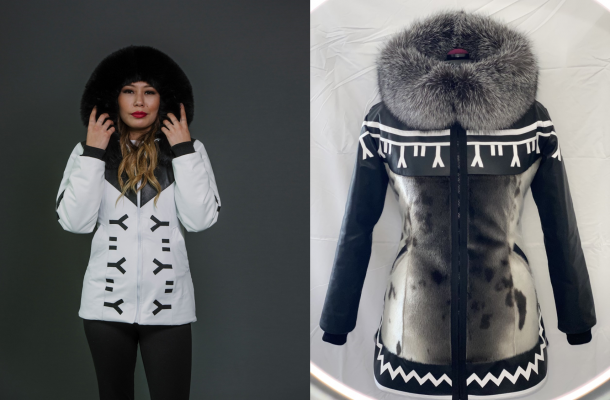 Behind the social media brand Inuk360 is Inuk, an Inuvialuit multimedia designer who was born and raised in The Northwest Territories, Canada and currently lives in the capital city of Yellowknife. Inuk loves her part of the country, all the people and traditions that it holds, which she infuses into each creation. For as long as she can remember, Inuk dreamt of becoming a fashion designer, and so she did, graduating from a two year apparel technology program, with a diploma from Olds College in 2008. Her art career began in the spring of 1990, and became a Master Caribou Hair Tufter, she found her niche. She has taught this age-old technique of hair tufting, to thousands of people around the world over the years, and proudly acknowledges being a part of reviving an artform that almost died out in the NWT. She then added more arctic furs and leathers into her creations, such as sealskin.

When she creates, Inuk imposes no limits on herself! Her accessories are distinct, and most importantly to her, they are her original designs, as evident in the Inuk360 selection available on our website. 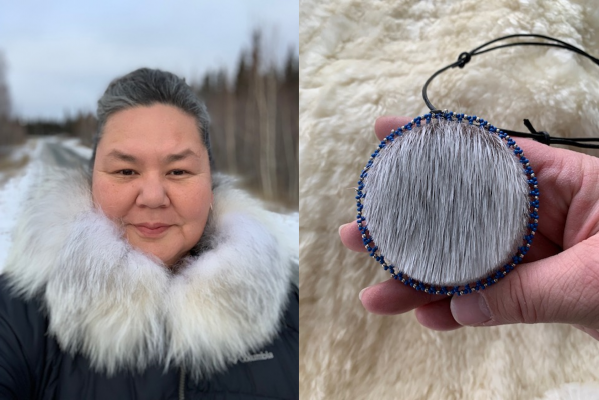 April grew up in Kugluktuk, Nunavut, but now lives in Embrun, Eastern Ontario. Introduced to sewing at a very young age, she combines the past with the present: the themes she explores and the materials she uses have been dear to the Inuit community for centuries, but she declines them with a great deal of modernity, playing with shapes and textures. Her leather goods (handbags, wallets), jewelry (necklaces, earrings) and accessories (bow ties) are hand-sewn in small batches and cut from seal fur. Not to mention that their colours come from natural dyes. April’s label is called Upinngaaq Designs which means spring in Inuinnaqtun, a season she loves above all else and which spur her creativity. Discover her work here. 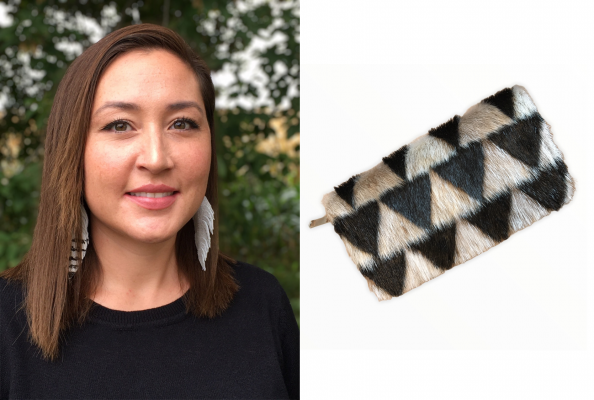 Erica is the creator of the She Was A Free Spirit brand. This Inuvialuit artist from Tuktoyaktuk, Northwest Territories creates jewelry inspired by her Inuvialuit culture and the unique colours of her Arctic territory. Coming from a long line of seamstresses, Erica has extensive technical knowledge. She designs easy-to-wear jewelry and fashion items that add a touch of originality to any look. No wonder the designer was featured in the market place at Toronto’s Indigenous Fashion Week in 2018 and selling out online at IFWTO 2020. She was also featured at Paris Fashion Week in 2019. Before they fly off the shelves like hotcakes, lay hands on Erica Donovan one of a kind creations via her website shewasafreespirit.com or via this link. 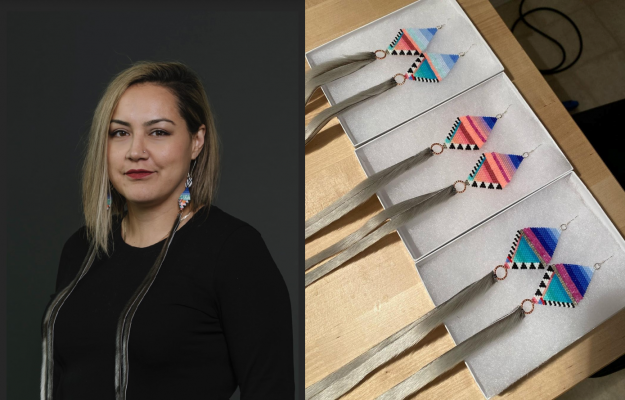 Taalrumiq/Christina King is know in her artwork by her traditional Inuit name –Taalrumiq – also the name of her label. The artist and designer from Tuktuuyaqtuuq likes to showcase her Inuvialuit culture through her works, which are ancestral in their design and composition, but contemporary in style. Taalrumiq creates a number of traditional Inuit pieces, made of seal skin and fox (jewelery, facemasks, parkas, mittens, etc.). But by creating them in lavish colours, with original and varied patterns, she is giving her creations a modern vision. Having left her home territory for the big city, she remains very attached to her roots. At every opportunity, she pays homage to her mother, grandmother and great-grandmother, to whom she owes her love of Inuit design and craftsmanship. Keep an eye out for Taalrumiq’s Taalrumiq creations now showcased on the Proudly Indigenous Crafts & Designs website. 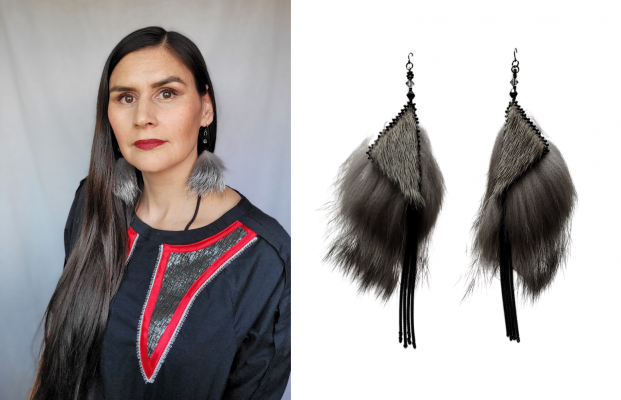 Alookie is the mother of Alook Design, a fun label of accessories and fashion jewelry. Leather and seal fur, caribou hair: the raw materials used by the artist echo her nomadic and Innu origins. Alookie Korgak’s creations are both delicate and modern, and they add panache to the simplest of outfits. The young woman is full of enthusiasm and has a weak spot for colour, beads and stones. She even sprinkles them all over her creations, making them unique and enticing. You will soon have the opportunity to see Alook Design‘s original creations right here on the Proudly Indigenous Crafts & Designs website. Stay tuned!

Born and based in Yellowknife, Northwest Territories, Cheryl is Métis and she is an artist in her own right. Her origins color her creations, which are also imbued with a contemporary touch. With her label called Snowfly, Cheryl works with seal fur and leather in her own way: she cuts, sews, colors them and incorporates them into clothes, bags and jewelry as well as furniture. These ancestral raw materials are highly inspiring in Cheryl’s eyes, to the point where she uses every platform within her reach to glorify their beauty, their characteristics and their uses. She even supports, through her art, various projects that help young people in her community. Cheryl Fennell is a committed artist with a big heart, whose works can be discovered here on our website. 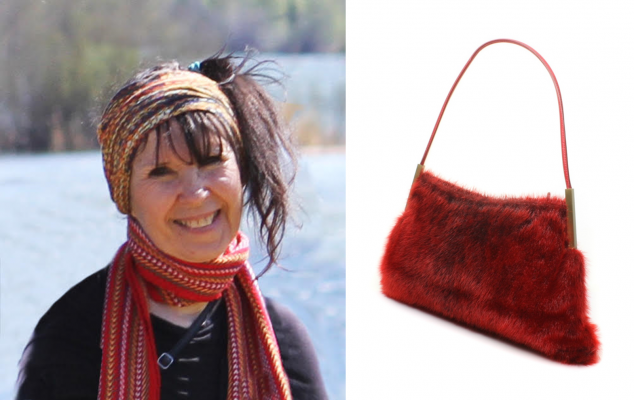 Canada is full of talented and committed Indigenous artists who intend to pay tribute to their origins and way of life through their original creations, whether it be music, poetry, throat singing or fashion. These art forms allow everyone to expand their horizons while highlighting exceptional women and Proudly Indigenous Crafts & Designs is proud to showcase them.