Why is the seal vital for Indigenous communities?

Historically, seals were one of the main food sources for Arctic communities. Seals provide materials to make garments for Indigenous crafters and their communities and to keep them warm. The seal meat and oil are consumed to sustain communities that are often food-insecure.  The blubber of the seal is sometimes used for their heat and for ceremonial purposes. In Canada, the seal is still an important part of the way of life and an essential source of income for thousands of households in remote coastal and northern communities today. In this article, we will talk about several reasons why seals are so important for Indigenous communities.

Throughout the Arctic communities in Northern Canada, some people rely heavily on seal hunting for food and for their life needs. For some families, the revenues generated from seal harvest represent a considerable part of their annual income. The value of the seal hunt is very important to those individuals who use seal products as a way to make money in regions that are very remote and where work opportunities are limited.

During years of economic uncertainties, as we experienced during Covid-19 crisis, seal hunting acted as an economic anchor, ensuring a stable source of food and income for Indigenous and remote communities who are livings in some of the harshest climates on the planet. In some families, each member is contributing to seal hunting activities.

Supports areas where food security is an issue

According to the “Angry Inuk” documentary, 7 in 10 Inuit children go to school hungry. The Inuit Health Survey found that in Nunavut, 68.8% of Inuit lived in a household that experience food insecurity. It is 6 times higher than the Canadian national average and represents the highest documented food insecurity rate for any Indigenous population residing in any countries which are a part of the OECD (1).

High rates of food insecurity also have been observed in the Inuvialuit Settlement Region (43.3%), and Nunatsiavut (45.7%). In terms of children, the Nunavut Inuit Child Health Survey indicated that nearly 70% of Inuit preschoolers lived in food-insecure households (2).

There are several factors that are aggravating this problem:

The weather condition in the Arctic region is really unpredictable. Cargo prioritization and shipment difficulties can prevent food shipments to these areas. The deceased wildlife population due to climate change, industrialization, and other factors further eliminated those traditional food sources for Indigenous communities.

Quality food, particularly nutritious food is limited in Northern communities. Since the food is more prone to spoilage when it is shipped from long distances, the quality and conservation of food cannot be always be guaranteed. Moreover, the contaminants, such as heavy metals, have been detected from canned food and other preserved food.

The cost of food can be significantly high in these communities due to the high shipping costs. One hamburger patty can cost $20 and 3 bananas can cost $7 in Canada’s North (3). On top of high grocery prices, the costs of hunting and gathering food have increased due to gas prices increasing. In fact, the desire of the Indigenous community for more reasonable access to their traditional foods, such as seal meat, is very present. Indigenous people still consider seal meat as an essential part of their daily diet and as one of their favorite traditional food today. In Canada’s north, where store-bought meat is expensive, a ringed seal can provide the equivalent of $200 or more worth of meat to a family and the nutrition value is much higher than another meat.

These factors contribute to Indigenous food insecurity in Canada and ultimately decrease well-being and perpetuate the poverty of Indigenous communities.

Connection with the land and this ancestral practice of seal hunting

Seals represent much more than food and an income source for Indigenous communities. They are a central part of Indigenous culture, tradition, and life itself.

The seal hunt is an important tradition and is part of the culture. The teaching and learning of hunting skills and traditional knowledge surrounding the environment reinforce intergenerational links. In order to adapt to their natural habitat, hunting has become their way of living. They also developed highly skilled techniques to transform and prepare seals in various ways during different seasons. 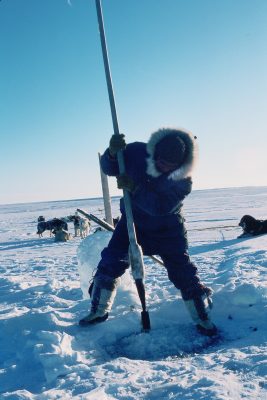 The use of the seal is more than a practical activity. It is a way to build relationships and transmit culture and it represents a belief system and a way of life for Indigenous communities. Despite the fact that in recent years, new materials were made available for clothing production, Indigenous artists still adapted and kept traditional skills and knowledge associated with seal furs and leather to create beautiful crafts and designs. Today they continue to pass these seal skills on to younger generations.

Ecological knowledge is defined as knowledge, practices, and beliefs regarding ecological relationships that are gained through extensive personal observation of and interaction with local ecosystems and shared among local people.

Hunting is one of the most important ecological types of knowledge in the Arctic and continues to be an essential activity for many Indigenous communities. The teaching and learning of traditional skills facilitate the transmission of proper hunting and processing techniques, safety, and how to keep seal populations stable and healthy. It helps to preserve traditional Indigenous knowledge and environmental stewardship. Additionally, it allows to collect important data on specific animal populations. This information is precious and provides knowledge to future generations and complements scientific data.