I first experienced the lighting of the Qulliq when I was traveling with Inuit designers throughout Europe. We were in Mandallen, Norway, where the Inuit designers and European designers were collaboratively working on the creation of seal skin products. Before the first morning session began, well known Inuit activist, artist, lawyer and designer Aaju Peter shared with the group the lighting of the Qulliq and the cultural significance behind it. She lit the stone lamp while singing a beautiful Inuit traditional song and the ceremony was moving. I came to learn how the Qulliq was so much more than a lamp. 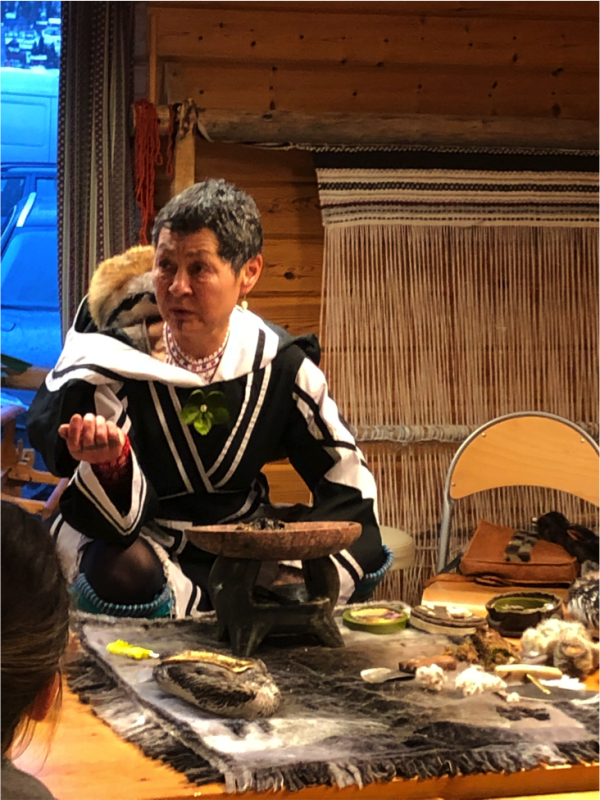 The Qulliq is the traditional oil lamp used by the people of the Arctic. It is made of soap stone in a rounded shape and traditionally would use the oil from blubber from seals or whales as fuel and arctic cotton grass as the wick. In the autumn, the Inuit women would gather the arctic cotton grass and moss, then dry it and combine them to make the wick for the Qulliq.

Traditionally, it was the woman’s role to tend to the flame of the Qulliq. It was extremely significant as it provided warmth and heat in the home, it would dry wet clothing, it provided light in the darkness of winter and it was the source that cooked food. The Qulliq has done this for thousands of years.

The tending of the Qulliq included many steps. First, cubes of the seal blubber were placed on the Qulliq’s concave surface. It would need to be crushed with a blubber pounder so as to get the oil. The wick would be soaked in the seal oil and arranged in a line along the edge of the Qulliq. Today, those who light the Qulliq may use matches but in early days, they would rub two flint stones to create a spark and then ignite the Qulliq. The women tending the Quilliq had to watch it closely making sure the flames were the right height, that it wasn’t producing too much smoke and most importantly, that it wouldn’t go out. The flame was tended with a hook-shaped tool called the taqquti. The taqquti was originally made by the husband as a gift to his wife, symbolizing she was the flame keeper of the home.

On a spiritual level, this role of being the flame keeper also signifies that women are life carriers. The Qulliq is used by women to take care of their families. Babies have been born by the light and heat of the Qulliq, and its warmth and energy continued to look after the family throughout the years. The Qulliq truly represents the strength and tenderness of Inuit women.

The Role of the Qulliq Today

In Inuit culture it is a custom to light the Qulliq before ceremonial events. Today, many special events in Canada’s North will open with the lighting of the sacred Qulliq. It is another way women are passing down the traditions of their ancestors.

Like many Indigenous cultural ways, the Qulliq survived colonization because of brave Elders

Research states that seal oil lamps like the Qulliq have been found in the North dating back 3000 years. During colonization, the missionaries tried to ban many cultural practices of the Inuit, the lighting of the Qulliq being one of them. Thankfully, Inuit Elders continued to pass along the knowledge to their daughters and continue to do so to this day.