When early European explorers arrived in Canada’s North, they introduced the Inuit seamstresses to brightly coloured glass beads that were known as sapangaq or ‘precious stone’. These beads became a highly desired trade item between the Europeans and the Inuit. The Inuit women used these beads to adorn themselves especially their seal skin parkas. They would arrange the strands of beads with great intricacy and uniformity.

Into the 19th century, trade increased and beads were more readily available. This is when regional styles of beadwork evolved.

“The Greenlandic women’s beads when covering the eyes meant she was married-when shorter meant she was free. This is neither but a touch of both.” – Designer Cheryl Fennell speaking on tradition and her own contemporary design.

In South Baffin Island, Labrador and Northern Quebec, beads were hung in long strands from a strip of scraped sealskin and then draped from shoulder to shoulder across the chest. The beads were strung in a sequence that created a series of horizontal colour bars across the front of the parka.

Seamstresses in the eastern Arctic also incorporated other objects obtained from traders in the decoration of their seal skin parkas: it might be metal, tags from tobacco cans at the end of a strand of beads or coins and beads hung vertically on the tail of the parka. Pewter spoon bowls made into the shape of bird’s eggs were a symbol of fertility.

Erica Lugt, the artist behind the brand She Was a Free Spirit uses drum dance parka black and white designs to create her unique Seal Skin Earrings. See the patterns in Erica Lugt’s sealskin earrings: 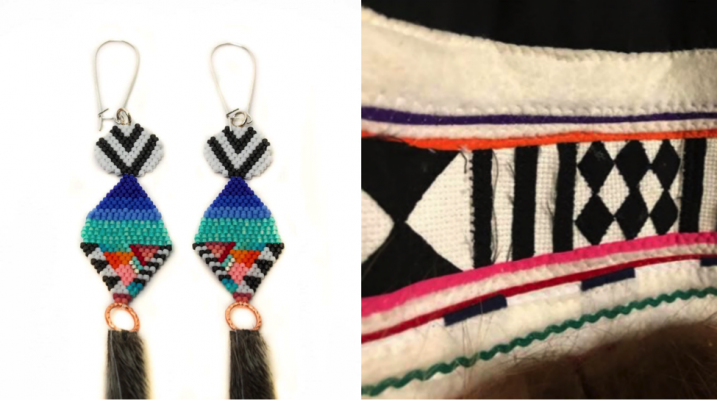 Alookie from Alook Design is using whale tales in her jewelry. This triple layer sealskin and bead whale tail necklace is a simple yet elegant way to wear a symbol of strength and power. 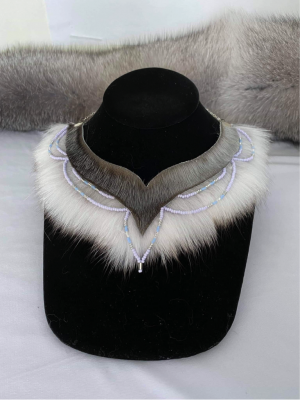 Becky Qilavvaq is a self-taught artist, throatsinger, and cultural educator from Nunavut. Her mother made her amauti over a seven year period using beads that belonged to Becky’s grandmother in the 1900’s. The beaded butterfly prominently featured represents resilience. Becky’s Mom said, “If something as delicate as a butterfly can survive and live in the Arctic, how much more can we?”

Traditional Tattoos in a Seal Parka?

Broad wrist cuffs are found on women’s parkas and each is marked with rows of triangles along a series of tiered lines. The decoration of the hoods also shows this layering of horizontal lines and the repetition of simple geometric motifs. The tiered pattern parallels the traditional tattoo patterns practiced by Inuit women. The triangular motif repeatedly used in the beadwork patterns is evident in the tattoo markings.

This relationship between beadwork and the traditional pattern of tattooing is clearly seen in the work of Inuit seamstresses both of yesterday and today.